skip to main | skip to sidebar

Why all the good things in Life have to come to an end???

I am talking about my dance rehearsal days which recently ended.On 26th Oct 2007 was the Grand finale of our Dance performance at the Annual Day function of my organization NSE. It was a novel idea this year to keep a Group Dance performance as the main attraction of this event. A special Choreographer was hired for this show. And he did a commendable job with making 40 of us shake our feet on the stage, many for the very first time!

As the saying goes,’ Real fun is in the journey’, we all had an unforgettable time span of around 15days of rehearsals for this dance event. This period will be etched in our memories to cherish for ever.

We all were very excited to dance in front of our own friends and colleagues. On the very first day we all gathered in the auditorium for selection. Choreographer was supposed to reach at 06:00 PM and we all were there in the Audi except the choreographer. We had to wait for him for almost two hours. He turned up with his group and they all looked typical hippy-attitude-dancer types! I mean their demeanour, dressing style everything was 'Different'! One of our SWC (Staff Welfare
Committee) members had a verbal fight with the main choreographer for wasting our precious time. He was furious but didn't show his anger then. His one of the group members made us all do a dance step and noted down the flexibility and skill with which each individual performed it. He was supposed to allot songs to every one on the basis of this observation and remarks. And we parted.

Second day the same story repeated and he was unreachable even on his mobile number. He didn't turn up only. I guess he took the verbal arguments with the SWC member the previous day, too seriously! For better I must say! Finally SWC Team decided to drop him and go for another choreographer and came 'Mr.Hiten Gala' and his associate 'Roxy' to teach us dance! 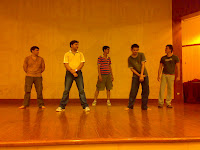 Practice sessions were supposed to start from a Saturday, about 15 days before the show. I had to go to Gujarat the night before. I asked SWC Team members to keep my place reserved as I was very very keen on performing on stage for this dance-show. I was doubtful if I would be able to be a part of the show as my stay in Gujarat was supposed to be for 5 days! I returned the next Thursday and went straight to the Audi at around 06:30 PM. The scene there was lovely! There were around 15-20 song snippets (some new and some old bollywood numbers) on which we were supposed to shake our legs and bodies! 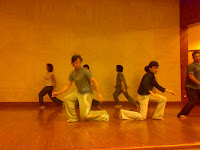 My Friend Suraj taught me steps for a song with easy dance steps and gave me hopes that I too would get chance to perform. SWC Members were also very cooperative and let me be in. Finally choreographer sir, Mr. Hiten too gave me a green signal for performing and I was happy like a child! 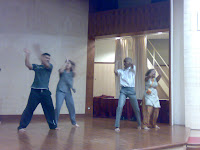 My luck was even better that 2-3 songs were yet remaining to be choreographed and selection of dancers for those was yet remaining. The ambience there in and around audi was very pleasant, energetic and youthful! 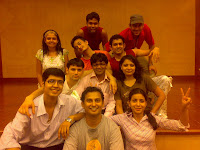 There were these two choreographers: one Mr. Hiten Gala himself who when showed the girls their steps, would put even bollywood heroines to inferiority complex! Such was the grace and energy-level exhibited by him. 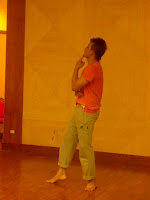 His dance steps were easy to pick up yet delicate and graceful! He choreographed two main full songs:'Silsila ye chahat ka...' from 'Devdas' and 'Dholi Taro...' from 'Hum Dil De Chuke Sanam'. 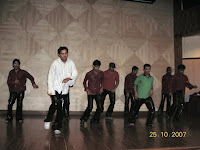 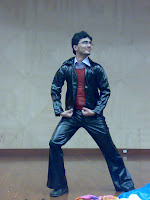 He also choreographed the entire old-new parody sequence. (One old song immediately followed by a new song with same mukhada).The other choreographer was, favourite among us - youngster’s, Roxy. 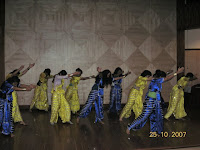 His body was like a Rubber! He was flexible like sponge! He choreographed most of the western-based bollywood dance numbers. I wished I could dance in all of those! But most of them were already choreographed before I returned from Gujarat. So I just had to see my friends tap their feet and bodies in modern and difficult yet lovely dance steps! 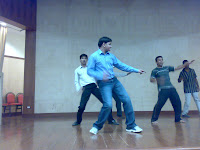 Roxy had choreographed the amazing steps in the Best possible manner. I was lucky to get to dance on the steps set by him on one song:'Jhoom Barabar Jhoom...' remixed version of title-track of 'JBJ'(which was my most favourite among all). 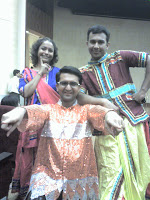 These rehearsal sessions started every evening at around 06:30 and went on till 10:15-10:30PM.Even after a tiring day (for those who actually worked!) at office, we gathered in the audi. But believe me; every one of us was looking forward to meet for the practice! After some dance, we used to have snacks, specially prepared for us dancers, (thanks to SWC team). 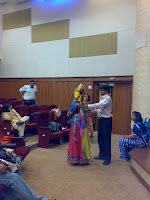 There were some Jain snacks also prepared every day for my jain-gujju friends (who do not eat garlic-potato-onion etc.) and tea was also served. A few cold-drinks were brought specially for choreographers (which was everyday sipped a little, by some mischievous friends of mine first, before choreographers!) 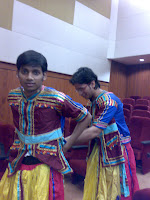 After snacks-break, we again used to rehearse our dances. Suraj was my choreographer as he shown me the steps for my first song 'Solwa saal hai...' from 'Partner'. Here the steps were not very difficult and that really helped me gain confidence! 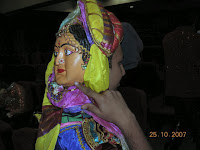 If I had started with those western-based numbers choreographed by Roxy, I would have surely found it very very difficult to pick up and come in sync with the other dancers! Rajanish also rehearsed the 'Solwa Saal..' number with me a few times. 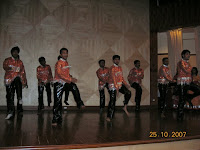 The other song I started dancing for was 'Rang De Basanti...' title track from RDB for which a few initial steps were set by Roxy and then we could not practice on it much for some days. 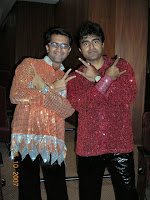 Every day our rehearsal session started with the practice of 'Dholi taro..' and 'Silsila...'.Most of my friends didn't like this idea as they felt Hitensir always snatched the stage for his songs and treated Roxy's western numbers unjustly! 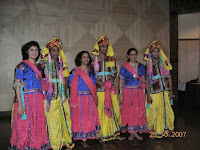 The western song participants had to practice outside the audi in small passage which was not very convenient and spacious. But we used to manage somehow. There were small small groups at times, 2-3 people performing on one song, 4-5 others on another song and so on. 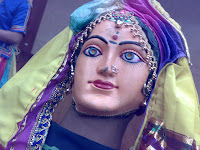 How can I forget my Birthday! I celebrated it rehearsing in the Audi! And these naughty nasty friends of mine gave me B'day Bumps also right there on the stage where we used to rehearse. 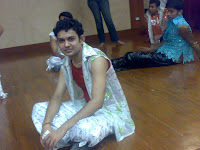 Yogesh and Asif had planned this surprise attack game and pulled me on to the stage and all the boys joined in and lifted me with my hands and legs and started giving me bumps! It was for the first time I was treated like this! 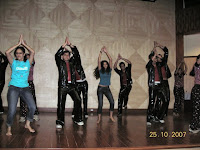 I could not decide if I liked this act or not! But I am surely going to remember Yogesh, asif, vaibhav and all of them who gave me B'day bumps...(chun chun ke badla loonga...)!!! 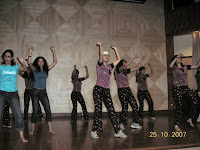 (Read more about the 'characters' or I shall say 'Dancers' (We all who danced in this event!) and about the Grand Performance at 'The Intercontinental' in the Next part of this Blog Series)
Posted by Vikas Ghanshyam Nayak at 12:16 PM